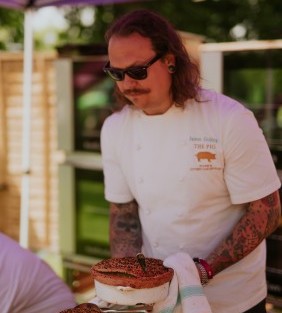 The Savoy Hotel first employed James while still just a student on the Specialised Chef course. This course is still run by The Royal Academy of Culinary Arts founded by Albert Roux and Richard Shepherd among others. He won his place at the Savoy on the back of his enthusiasm and excitement for cooking, as well as for this determination.

Within 3 years he had completed all sections at the Savoy and hand a firm grasp of Classical French cooking. It was at this time Chris Corbin and Jeremy King were beginning to attain legendary status for the sophisticated elegance of Caprice Holdings; Le Caprice, The Ivy and J Sheekeys. In 1998 James was offered the position of Chef de Partie at Le Caprice working under Mark Hix and later Elliot Ketley.

It was during the next 7 years James’s love for British seasonal produce began to present. Truffles, foie gras and caviar were happily exchanged with elvers, lamb’s kidneys, Dorset cockles and snipe. James stayed at Le Caprice until 2001 when head chef Tim Hughes offered him a new position at the seafood restaurant J Sheekeys. James left J Sheekeys in 2005 on a high note. He had risen to Sous Chef, been a part of restoring the restaurant to its former glory and had learned how to motivate and train the junior members of staff.
Leaving London James accepted the position of Head Chef of the 6th floor restaurant at Soho House New York. In this “city that never sleeps” James still managed to find the time to take 2 weeks to be involved with the exclusive members’ only Oscar party that Soho House Hollywood hosts annually in Los Angeles, California. It was his experiences in America that finely tempered his modern British style of cuisine.

In 2006 James returned to his home on the south coast as both a seasoned chef and new father. James’s work began to take on inspiration from the region and its unique produce from both forest and sea. James feels the responsibility to promote and protect the traditional foods of the United Kingdom. To James this means seeking out small producers and local butchers in the habit of working sustainably and with passion for their products. Provenance and seasonality are the key ingredients when Chef James Golding builds his menus.
Through his work as Group Chef Director at THE PIG Hotels & Fellow of the Royal Academy of Culinary Arts Sustainability committee, he has worked to raise interest in where his food comes from and how it Raised & how it tastes with respect to the environment. He has done this through various TV appearances, but most importantly by working closely with his head Kitchen gardeners, Head Chefs, and through his commitment as Food Ambassador for the New Forest Marque & Dorset food & drink to help support local producers and the community.
James Has made it his mission to train the next generation of chefs through THE PIG apprenticeship programme to his philosophy and ethos, this has won them multiple awards since its launch with over 25 students chefs working & learning across the group.