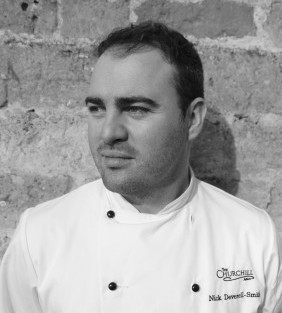 Nick Deverell-Smith, owner and head chef of The Churchill Arms, left school at just fifteen to study at Birmingham’s College of Food. Crowned Junior Chef of the Year 2000, Nick later worked alongside the likes of Gordon Ramsay, Marcus Wareing, Marco Pierre-White and Eric Chavot. He then became Head Chef of the restaurant at Soho House and Dean Street Townhouse in London. With bags of experience in esteemed kitchens under his belt, Nick decided to bite the bullet and set up his first business somewhere close to his heart, The Cotswolds. In 2015 The Churchill Arms was born and has prospered ever since.