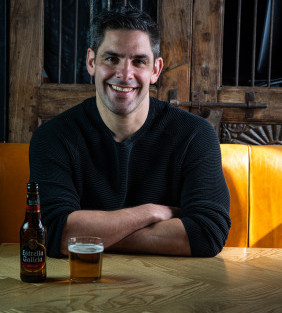 Co-founder and owner, with his brother Tom & sister Natalie, of the hugely successful 44 Group, a restaurant group in South Wales and Bristol regarded as serving up some of the finest Spanish food in the country.

Since its inception twenty years ago, the Bar 44 tapas y copas brand has built up a loyal and ever-growing customer following.  It has cemented its reputation as one of the UK’s leading tapas restaurants for modern Spanish cuisine and is dedicated to combining the best regional Spanish produce with seasonal local ingredients and exceptional Spanish drinks.
The restaurants are known for contemporary twists on dishes that never lose sight of their classic origins, all of which are paired with wines that Owen is passionate about sourcing.
The group consists of 4 Bar 44 venues focusing on tapas and sherry, as well as the Northern  Spanish restaurant Asador 44, bringing a modern take on traditional cookery over fire and a superb wine list. This year (2022) the group have launched Parador 44, a Spanish inspired boutique hotel in the heart of Cardiff, and the UK’s first of its kind. It has also launched Mercado 44, an extension of the lockdown Covid food and drink shop, taking it nationwide and opening it’s first bricks and mortar site.

Owen heads up the kitchen teams and leads all cooking and food direction for the group, as well as all wine, sherry and drinks curation and training. He is a regular cooking up feasts at food festivals and leading produce talks and demonstrations.

He has had the honour of being crowned UK Restaurant Personality of the Year for at the annual Imbibe Awards. Previous winners include Heston Blumenthal and the Galvin brothers.
He has also just been invested (October 2021) into the Gran Orden Caballeros del Vino; an honour only bestowed on 80 or so people over the last 36 years, for his dedication to championing Spanish wines. He was invested with José Pizarro, and other members include Oz Clarke and Tim Atkin.

Constant development, evolution and growth over the years has seen much recognition including:

Owen is besotted by his historic love of sherry wines and the Jerez and Cádiz region of Andalucia. He is a certified international Sherry educator. He regularly runs Sherry education workshops and pairing dinners for customers of thew restaurants as well as for local community groups, media and trade and regularly contributes Sherry articles to the Welsh and National UK media.

He enjoys being a brand ambassador for Bodegas Baron, having been instrumental in setting up a UK import partner for the Sanlúcar based manzanilla specialist.
His first own bottling of Manzanilla is a personal highlight of pride also.

Owen has also represented Sherry Wines Jerez at ‘Three Wine Men’ events with Olly Smith and Oz Clark, and was chosen to speak on stage at the International Copa Jerez forum in 2019, alongside one of the worlds most celebrated chefs, Josep Roca.

Owen has personally curated the sherries, wines, cavas, spirits and vermút on the Bar 44 drinks lists, as well as all of the regional Spanish and Welsh produce used in the kitchens. Much of his time is spent pairing Sherries with the Bar’s signature tapas dishes to champion the drink in a big way.

Owen also frequents leading artisan food producers across Spain to immerse himself in their family history and production methods in order to ensure that the very best quality and knowledge is transferred back to his kitchen teams and customers.

His love of traditional and modern Spanish food and drink stems from childhood family holidays to Spain. He then began experimenting in the kitchen as a young teenager. After University, Owen went on to acquire his first venue with his brother Tom, on the high street of their quaint market hometown of Cowbridge in South Wales.

For many years they were both the head chefs in the kitchen, as well as the being the sole front of house managers, waiters, bartenders and cleaners (!), juggling long days and nights but fuelled by the passion of providing top quality Spanish produce and wines to people in an area that hadn’t seen such things before.

Owen has been fortunate to link up with great restaurateurs and chefs throughout the UK and Spain during this time, developing lasting relationships forged through the common passion for Spain’s food, drink and culture. Collaborations with like minded operators are key to motivating his teams, as are taking them on producer trips to Spain, fuelling the next generation of Spanish wine lovers in the UK on trade, as well as making the 44 group an inspiring company to work for but with Spain and warm hospitality and knowledge at its heart.

In 2017 Asador 44 was launched, with the help of the bar 44 team and an exciting new team of talent. Asador 44 is Wales and the West’s first Northern Spanish Asador, specialising in cooking impeccably sourced Spanish and local produce over wood fire.

Personally sourced Galician blond beef as well as ex dairy cattle feature, alongside milk fed Segovian lamb and suckling pig, daily market fish, a cheese room, local Welsh vegetables, and one of the cities only sommeliers, developing a focused traditional as well as natural and biodynamic wine list. The aim with Asador was also to open people’s eyes to the endless variety and quality Spanish wine has to offer.

Also, amongst this time, Owen along with brother Tom have written their first cook book, which was released in November 2021. It celebrates their story and history of the company, as well as 100 inspiring recipes, all paired with drinks, and giving the book an equal billing to both the food and drink they love so much.

It was immediately recognised in the Mail on Sunday as being in their top 12 books of the year. Matt Tebbutt has written a wonderful foreword for the book.