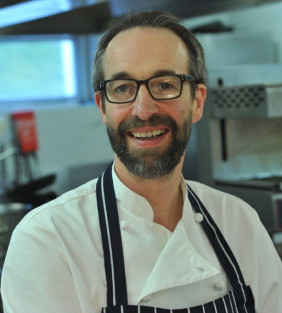 Stephen Terry is Chef Patron of The Hardwick in Abergavenny, and has worked with some of the best chefs in the world over a long and successful career.

Stephen was mentored by Marco Pierre White at Harvey’s, and then moved to La Gavroche to work under Michel Roux Jr; this introduction to classical French cookery became the foundation to Stephen’s own food philosophy. He was appointed as Head Chef at The Canteen in Chelsea Harbour where Stephen was awarded his first Michelin star at the age of 25. He then worked in the South of France, in Paris with Alain Passard, and then came back to London to open Oliver Peyton’s Coast as Head Chef in Mayfair. Many chefs worked under Stephen at this time, including Jason Atherton, Hywell Jones, Mark Sargent and Dan Lepard.

In 2001 Stephen opened The Walnut Tree Inn, which was awarded a Michelin star the following year. Before opening The Hardwick, Stephen took a consultancy role at Cecconi’s in Mayfair.

Stephen appeared on BBC 2’s Great British Menu in 2008, representing Wales and cooking the fish course at the final banquet for the World’s top chefs. He appeared again in 2009 and 2012, and was a mentor in 2010. Stephen has appeared regularly on Saturday Kitchen since 2011.

Stephen also had the great honour of cooking for President Obama and the heads of state at the Nato Summit in Cardiff Castle in 2014, which gave him the opportunity to showcase the finest local produce.