Former bank manager Kenny Tutt was crowned MasterChef Champion in 2018. Since then, together with wife Lucy,  in 2019 he went on to open his first restaurant and cookery school, PITCH in his hometown of Worthing, and most recently launched his first space in Brighton, Ox Block at Shelter Hall, and Bayside Social in an impressive location on Worthing Seafront. He’s a popular guest judge on MasterChef and appeared on the first ever MasterChef Champion of Champions at the end of 2021. Kenny’s well-known for highlighting his local suppliers and produce from the South Coast, and for creating elevated versions of the classics such as his luxury fish pie as seen on MasterChef. 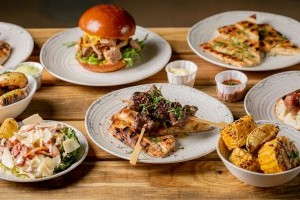