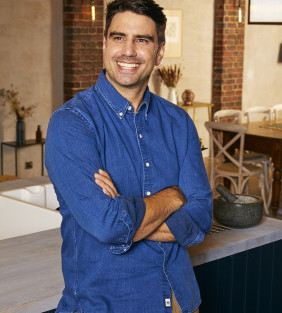 Chris Bavin is one of the leading faces in food and consumer television.

He started his career in fresh produce by working with growers supplying wholesale markets, first with flowers and plants and later moving to fruit and veg. Chris has worked across all areas of fresh produce including founding ‘The Naked Grocer’, one of the first zero packaging no plastic retail business, which he ran for nine years. During his time at the helm the business was awarded ‘National Independent Retailer of the Year’ twice.

Chris first appeared on our screens in BBC’s Eat Well For Less in 2013 and has since gone on to present a further six series of the show. Alongside this he has also presented Tomorrow’s Food, The Truth About Meat, Food: Truth or Scare and Shop Well for the Planet, all for BBC One. He has also appeared as a judge and the resident fruit & veg expert on BBC’s Best Home Cook.

As well as being a regular reporter for The One Show (BBC) Chris has presented several consumer and property based formats including Wanted: A Simple Life and Escape to the Country. He has also shown us his horticultural roots by presenting two series of Britain in Bloom and he is a regular feature on the BBC’s Chelsea Flower Show coverage.

He is also a published author, with two cookbooks to his name. His first, ‘Good Food Sorted’ was published by DK books in March 2019. His second, Fakeaway was published in January 2020.

Chris has become a regular face at food festivals across the country hosting sessions as well as leading informative, fun and entertaining food demos.