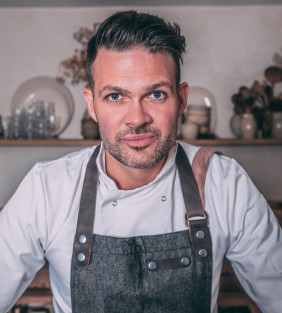 Since winning the title and launching his debut restaurant, Kenny has also headlined food festivals & events across the UK, and partnered with a host of industry names on sell out pop ups & supperclubs too. Kenny cites his influences as some of those who were on the scene as he was growing up – larger than life Keith Floyd, Gary Rhodes, Paul Rankin, Jamie Oliver & Rick Stein. He thinks they all have something in common though, namely making food more accessible, but most importantly, the way that food & cooking brings people together. It’s with this attitude that Kenny approaches all of his projects, with the sole aim of delivering great food alongside a wonderful experience.

Presented with the challenges of 2020, Kenny & team launched Tutt’s Truck, his first foray into street food. With the truck located at various points along the Sussex coast over the summer, Kenny was still able to delight his customers with the food they know & love from the restaurant. Kenny has also worked hard with his team to curate sell out celebratory meal kits over the last year, with plans to continue this into the future, such was the response.

Inspired on a daily basis by his Sussex surroundings, and the fantastic produce available on the doorstep, Kenny creates menus that make it difficult to choose! From his signature PITCH doughnuts to the now famous High Steaks sandwich he serves at Tutt’s Truck, Kenny continues to bring new ideas to the kitchen, and 2021 is no different. He’s re-opened Pitch, launched his second restaurant Ox Block at Shelter Hall in Brighton, and his third restaurant, Bayside Social  is set to open in a brand new + very impressive space on Worthing seafront in September. The popular chef continues to go from strength to strength cooking food that people return for time & time again.