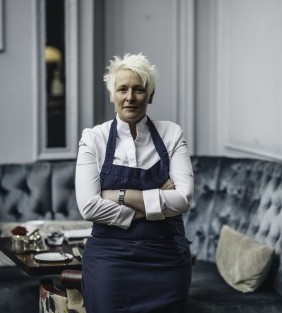 Lisa’s first kitchen job was working part-time at the Holbeck Ghyll in Cumbria, along side studying for an NVQ in catering. She also worked at Le Champignon Sauvage, where she went full time after completing her course. After a year, she returned to the North in 2001 and started at Northcote Manor as a demi chef de partie.

In the three years following this, Lisa was promoted three times, before being appointed as head chef in 2004.
In that year, she retained the Michelin star that Nigel Haworth was originally awarded in 1996. In December 2017, she announced that she would be taking on a new role as executive head chef, as Nigel Haworth stepped back from the day to day management of the restaurant.

In 2008, the Northern Hospitality Awards named Lisa as Chef of the Year. In 2010, Lisa competed in the fifth season of Great British Menu, representing the north-west. She was the only female chef competing that year and she won the round, advancing to the final. In 2011, she was named Restaurant Chef of the Year by the Craft Guild of Chefs. She also appeared in the semi finals of series eight of MasterChef: The Professionals as a chef mentor.