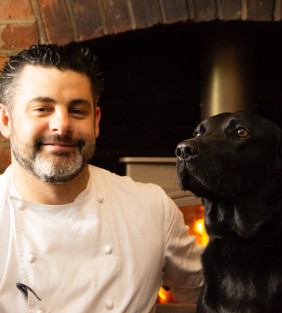 Yorkshire-born Tim has spent 20 years in some of the best restaurants in the UK and boasts a stellar CV. His time with Simon Gueller, John Burton-Race, Martin Burge and Daniel Clifford have all influenced Tim and he is emerging as one of the UK’s top chefs.

Tim’s first taste of catering began aged 15, washing pots and working in pub kitchens in Kirkburton and Honley in Yorkshire. Soon, the then 20-year old, Tim realised his talent and a desire and ambition to work in a Michelin-starred restaurant and joined Jeff Baker at Pool Court in Leeds.

Tim then gained experience working alongside Simon Gueller at Leeds’ waterside restaurant, Rascasse, which marked the end of his apprenticeship. He then spent four years with John Burton-Race firstly at two Michelin-starred L’Ortolan near Reading, before helping him open the Landmark Hotel in London as his senior sous chef.

When a Landmark colleague, Martin Burge, moved to Whatley Manor in the Cotswolds as head chef, Tim followed as his deputy where they worked together for seven years achieving two Michelin stars along the way and sparking his imagination and creativity.

For nearly 20 years Tim had finely tuned his craft in seriously high level restaurants, including Daniel Clifford’s Midsummer House, however he was still hesitant to go it alone, until he joined Launceston Place in 2012 as head chef. Within six months, it was awarded its first Michelin star and four AA rosettes soon followed.

In late 2015 Tim joined Lady Bamford at the Wild Rabbit in Kingham, Oxfordshire as executive chef and once again achieved a Michelin star under his tenure. After two successful year Tim left Oxfordshire and in early 2018 reunited with two Michelin-starred chef Daniel Clifford as chef partner of his restaurant with rooms in Little Dunmow, Essex. The restaurant was soon renamed Tim Allen’s Flitch of Bacon Inn and Tim, with the help of his French wife Magali, at last had the opportunity to run their own business. Serving seasonal British cuisine with a modern edge, the restaurant achieved its first Michelin star within six months and today is the only Michelin-starred restaurant in Essex.

Originally hailing from Yorkshire, Tim was always a keen gardener from an early age and his love and respect for home grown honest ingredients shines within all his menus. Tim has a passion for sourcing and foraging local seasonal produce and supports local farmers and artisan producers who harvest the local forests, marshlands and coast for high quality ingredients.

Tim has even had time to appear on TV appearing on the BBC’s Saturday Kitchen and Great British Menu representing the North East.

Tim’s passions outside of work revolve around family life with wife Magali, their three children and beloved dog Oscar.