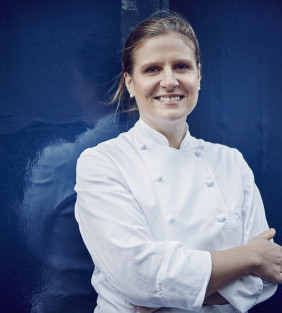 Chantelle Nicholson is the multi-award winning Chef Patron at Tredwells, in the West End’s Seven Dials, as well as Group Operations Director for Marcus Wareing Restaurants. As one of the UK’s leading female names in the hospitality industry, Chantelle’s impressive ascent on the culinary career ladder and achievements to date, set her apart as a remarkable talent and a source of inspiration to hospitality professionals across the UK.

Originally from New Zealand, Chantelle trained as a lawyer, before discovering her passion for food. In 2004, she entered the Gordon Ramsay Scholarship competition, earning a place in the final. There she met Josh Emett, judge and then Head Chef of The Savoy Grill by Marcus Wareing. Impressed by her skills in the competition, Josh offered her a job, which she took up without hesitation, moving from Wellington to London then and there.

2014 then also saw Chantelle open Tredwells, the largest of the group’s restaurants. Returning to the kitchen in early 2015, Tredwells won the much sought after ‘Best New Restaurant – London’ at the 2015/16 AA Hospitality Awards. In July 2016, Chantelle’s skills were once again recognised as she won ‘Manager of the Year’ at the 2016 The Caterer and Hotelkeeper Awards (The Catey’s), swiftly followed in October 2016, by winning the prestigious ‘Woman of the Year’ at The Shine Awards, which celebrate female game changers in today’s hospitality world. Most recently, Chantelle won again at The Shine Awards, being presented with ‘Chef of the Year’ in October 2017. 2019 saw her feature in CODE Hospitality’s UK’s 100 most influential women.