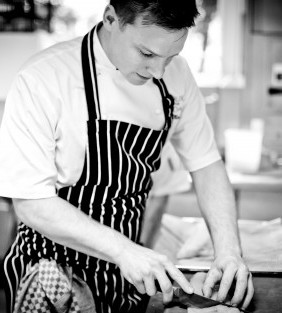 Chris King was born in Connecticut, USA but spent most of his life travelling extensively with his family, settling in Spain, Portugal, Argentina and England. Constantly surrounded and inspired by the various cuisines, King always knew he wanted to be a chef.

In his teenage summers, King worked at restaurants in Cómpeta, Málaga, Spain where he developed an appreciation for market-fresh ingredients. Unlike most culinary hopefuls, King decided to pursue English at the University of Leeds, and on the side continued to develop and expand his love for food at The Pool Court, the only restaurant in the region to be awarded a Michelin Star at that time. Without any additional training but determined to pursue his passion further, King reached out to then rising Chef Michel Roux Jr. via his website and asked how he could get into cooking. Within days, Roux replied, offering King a few days work experience in renowned restaurant, Le Gavroche.

Upon graduating with a first class degree in English in 2004, King joined Michel Roux Jr at Le Gavroche full time as a Commis. Under the guidance and supervision of the experienced chef, King mastered classical cooking techniques and was named Sous Chef in just four years.

After completing his apprenticeship, King moved to New York City to work alongside American culinary icon, Thomas Keller. King remained at Per Se with Keller until July 2010, when he returned to the UK to assist with the opening of Roux at Parliament Square. The restaurant opened in September 2010 with King as Sous Chef.

When Michel Roux Jr. and his father Albert opened their first collaboration in 19 years, Roux at The Landau at The Langham, London, King was appointed Head Chef. Roux Jr says of his protégé, “Chris King is a rising star, and his menus reflect the Roux trademark style of classically-constructed French dishes, blended with today’s tastes for lighter choices. He has a modern approach to combining ingredient, and a contemporary style of presentation.”

Since 2015, Chris has been Executive Chef at The Langham, London overseeing the food and beverage in fine-dining Roux at The Landau, Palm Court – famed as the birthplace of the afternoon tea tradition, multi-award winning Artesian and the new modern British tavern, The Wigmore. Chris also oversees The Langham, London’s Private Dining (Banqueting) and Private Kitchen (In-Room Dining).

King’s menu at The Langham, London showcases his attention to detail and emphasizes the importance of quality ingredients and classical techniques. While the menus are changed seasonally, King’s simple pared-down style of cooking remains constant.

Chris King was recently awarded Hotel Chef of the Year at the prestigious industry awards, the Hotel Cateys 2017.

When not in the kitchen, Chef King can be found scouring Europe for the best and most authentic food markets, alongside his wife, Frances.