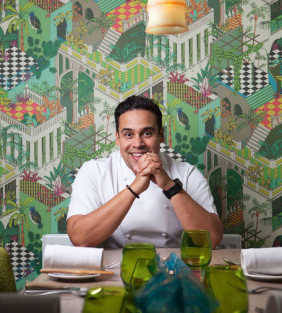 Born in Southampton, Paul’s love of hospitality came from growing up in his Mum and Dad’s Guest house. His career really began when he moved to London at just 18. He gained tremendous experience working for Gary Rhodes at ‘Rhodes in the Square’, Gordon Ramsay at the 3 Michelin star restaurant on Royal Hospital Road and Marcus Wareing at Petrus in the Berkeley hotel. He then went on to establish two successful restaurants and accommodation in Cornwall – Michelin starred Paul Ainsworth at Number 6, Italian influenced Rojano’s in the Square and 6 boutique bedrooms at Padstow Townhouse.

In 2011, Paul appeared on the BBC2 TV series Great British Menu. Competing against some of the nation’s top chefs, Paul represented the South West with his dessert ‘A trip to the fairground’ which won the finals and made it through to the prestigious banquet table.

Paul’s unique cooking was recognised with a Michelin Star, awarded in October 2012 and a 4th AA rosette in September 2016.

Paul and his team work closely with local farmers, fishermen and artisan suppliers to create the dishes at ‘Paul Ainsworth at Number 6’ and ‘Rojano’s in the Square.’

In 2014 Paul and his wife Emma took on their biggest project yet by converting an 18th century townhouse hotel into 6 individually designed suites. The ‘Padstow Townhouse’ opened in December 2015 and now completes Paul’s Padstow experience. The beautiful Townhouse offers spacious suites with luxury bathrooms, kitchen pantry/honesty bar and in room spa treatments. It has since been awarded 5 star AA Gold.