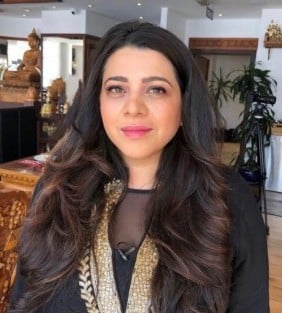 Shahnaaz Ayub is a Bedfordshire based senior child protection lawyer by profession which she runs in parallel with being a British-Indian celebrity chef. She came to prominence when she won a national competition judged by celebrity Chef Cyrus Todiwala 0BE.

She is author of the very popular Perfectly Easy Indian Food cookbook which is the essential guide to cooking traditional Indian favourites and basically “does what it says on the tin“ taking out the complexity and dispensing with the myth by proving that classic Indian dishes can be achieved with ease without compromising on taste and nutrition.

Following the success of her cookbook, Shahnaaz was commissioned to create and host two series (each of 10 episodes) of the show For The Love Of Food which received international acclaim. Shahnaaz appears as a regular guest on BBC radio sharing recipes and offering advice on healthy eating.