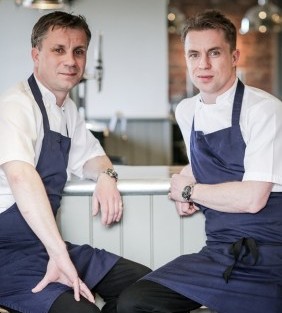 Chris and James Tanner are both acclaimed chefs and restaurateurs.They embarked at a very young age into the restaurant trade. Chris trained and spent five years with the Roux Brothers in London, New York and France. James followed a similar path working for the Roux brothers in Lake Placid and then on to Martin Blunos at restaurant Lettonie in Bath. Their ultimate dream was to open their own restaurant, that dream became a reality in July 1999 when they opened "Tanners" in Plymouth, Devon. Tanners went on to gain critical acclaim with listings in all the major food guides including winning AA restaurant of the year for England in 2007. In 2006 they opened the Barbican kitchen in the Plymouth gin distillery. An opportunity arose in 2013 to acquire a pub site back in their home town of Tunbridge Wells. After an extensive refurbishment The Kentish Hare opened its doors in May 2014.This was the same year they decided ( after a successful 15 years) to sell Tanners and concentrate on their new business challenges. The majority of the Tanners staff all transferred over to the Barbican Kitchen some of which have been with the brothers for over 10 years now. In 2016 The Kentish Hare won Best newcomer in the top 50 Gastro pub awards and lists in the AA and Michelin guides. The Tanner Brothers continue to support the next generation of chefs and front of house and are patrons at both Plymouth city college and Bromley College in South East London. James has been a regular on TV for some 15 years now on shows such as Ready Steady Cook, Saturday kitchen, UKTV food and ITV's Lorraine show. The Tanner Brothers between them have co-written four cookery books including for chocolate lovers, ice cream, James Tanner takes five, and old favourites new twists.