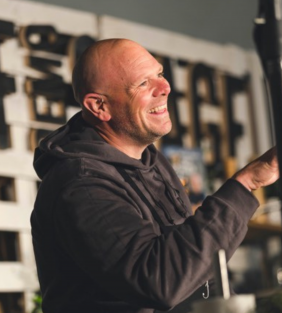 Tom will be hosting...

Since opening The Hand and Flowers in 2005, Tom’s career path has progressed and grown with the support of his wife Beth and many members of key staff, allowing the business to grow and diversify. In 2011, The Hand and Flowers was the first pub to receive two stars in the Michelin Guide. The Coach opened in Marlow in 2014 and within its first year of trading received three AA Rosettes. The Coach was awarded one star in the Michelin Guide 2018.

In 2009 Tom first appeared on television competing in the Great British Menu for BBC Two, where he won the main course and cooked at the banquet for Prince Charles and Camilla. He competed again the following year and proceeded to win the main course for the second time, this time cooking for a banquet in Leadenhall Market in the City of London.

Tom is the author of five best-selling cookbooks and also recently worked with Brand Events to launch a series of successful and innovative pop ups and festivals including The Pop Up Picture House and Pub in The Park.