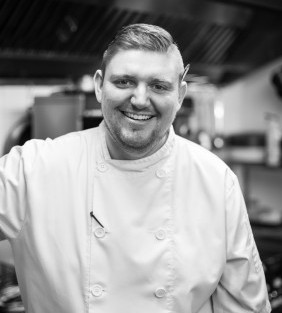 Robert Taylor started his catering career working in his parent’s restaurant as a teenager, he later went on to gain his qualifications at Thanet College. Robert moved to London to start work at the Royal Horse Guards Hotel, and after few years working in London Robert met his wife Donna at the Royal Garden Hotel. The couple decided to return back to Donna’s homeland of Australia. The two years spent in Australia were a massive learning curve in Roberts catering career taking on the style of food in Australia which at the time focused on great ingredient’s prepared simply. The couple decided to return to the UK with the dream of opening their own place. Within a couple of years they took over The Compasses Inn Crundale, where as an owner/proprietor Robert has come into his own. 2017 saw the Compasses Inn awarded two AA Rosettes, Michelin Recommended for the second year running. Winning The Great British Pub Awards, Food Pub of the Year and debuting on The Top 50 Gastro Pub list at number 17, where Robert was also named their Chef of the Year.