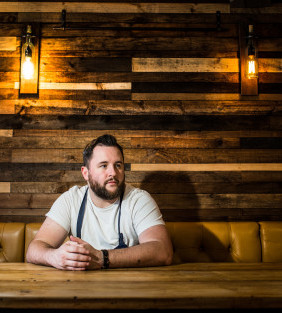 From the industrial reaches of Coventry to sunny California, Paul Foster has made a name for himself cooking well-executed food with a focus on taste. His signature style of taking humble ingredients and giving them a gastronomic twist has seen him well placed as head chef at restaurants across the UK.

Paul Foster became interested in food from a young age. His parents were involved in the pub business with his mother running the kitchens, and she would help him to bake cakes which he sold to the pub’s bouncers.

His journey to becoming a top chef saw him gain experience under a cross-continental array of Michelin-starred chefs. After completing a catering course at Henley College Coventry, Paul worked at several restaurants around the Midlands. Paul later spent a year at Le Manoir aux Quat’ Saisons in Oxfordshire working across several different sections, including a spell under Benoit Blin on the kitchen’s pastry section. It proved to be a formative year, giving him his first taste of working in a kitchen with a large number of chefs.

In February 2016, Paul announced he was leaving Mallory Court to crowdfund his own restaurant through Kickstarter. He achieved his target of £100,000 at the beginning of March 2016, and opened Salt in Stratford-upon-Avon a year later. Here, he continues to evolve his cooking style as his wife Rhiain runs the business.