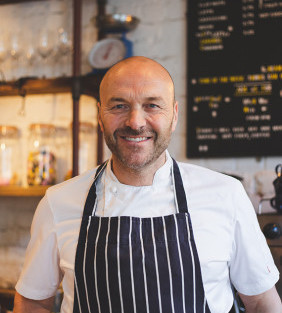 Simon will be hosting...

Simon Rimmer is best known as the resident chef on BBC2's Something for the Weekend. He opened his first restaurant, Greens, in 1990, with two cookery books and hardly any experience in the kitchen, but with an overwhelming passion to create a great destination. He is now the resident chef on Channel 4's Sunday Brunch which started on Sunday 25 March 2012, which replaced Something for the Weekend.

He wasn't even supposed to be in the kitchen. His role, or so he hoped, was front of house lothario to the beautiful people of West Didsbury. However, financial reality got him into the kitchen (no money to employ anyone) - a decision that changed his life.

Within two years the Guardian described Greens as one of the most exciting restaurants in the UK, even though it was vegetarian. From there, Greens has gone from strength to strength, increasing from 28 to 48 covers in 2005 and, after the purchase of the dress shop next door, it's now a massive 90 covers and still packed. It has also gone on to win several awards, including The Big Issue's Restaurant of the Year award.

Other TV appearances include BBC2's Great British Menu, Celebrity Mastermind, Grub's Up, Recipe for Success, BBC1's This Little Farmer, Saturday Kitchen, Richard and Judy on Channel 4, Cooking the Books and Breaking in to Tesco for Channel 5.

He was the mentor on the Channel 5 programme Breaking Into Tesco, a show where people competed to get their food products sold by Tesco.

Simon supports Liverpool Football Club, but also has an in depth knowledge of the history of Tranmere Rovers, which he chose as his specialist subject on the BBC quiz Mastermind.