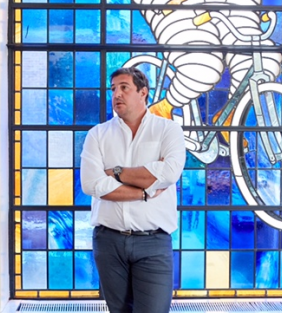 “I was practically born in the kitchen because my parents had a restaurant in Lyon where I grew up. Even though my mother never dared let me near the restaurant kitchen, cooking has always been a passion.”

Claude Bosi, born in 1972, graduated from catering college and did his apprenticeship in his native Lyon. From there, he moved to Paris where he officially launched his culinary career at Le Chiberta (Michelin two star) as Demi Chef de Partie, where he worked for a year. His second position for the following two and a half years was with Alain Passard at L’Arpège in Paris, starting as Chef de Partie, before climbing the ranks to Sous Chef – during this period L’Arpège graduated from two Michelin stars to three. Claude followed this tenure with a stint at Alain Ducasse in Paris, as Chef de Partie again, for just under a year. Claude then moved to England in November 1997 where he worked as Sous Chef, then Head Chef, at Overton Grange, south of Ludlow, in Shropshire. The restaurant earned a Michelin star under his direction as Head Chef in 1999.

He then opened Hibiscus in Ludlow in 2000, and in 2001 the restaurant was awarded its first Michelin star, followed by a second in 2004. Claude sold Hibiscus in Ludlow in March 2007, and relocated it to London with support from three investors. The 45-seat restaurant then launched in October 2007 at 29 Maddox Street in Mayfair. In late 2013, Claude bought out his investors, redesigned the interior to give it a more relaxed yet personalised feel, and added the Chef’s Table and a development kitchen.

In September 2014, Claude and his brother, Cedric Bosi, opened The Townhouse in Ludlow, following a light refurbishment. Whilst the nine-bedroom hotel does not have a restaurant, guests are encouraged to dine at the nearby Charlton Arms pub, owned by Cedric and his wife, Amy Bosi. The family launched another pub – The Swan Inn, Surrey – in late May 2016. A ‘traditional British pub, interpreted by a Frenchman’, in the words of Claude. The brothers opened also The Church Inn in their beloved Ludlow in December 2016, a refurbished 14th century pub which serves traditional pub fayre.

Claude Bosi at Bibendum is Claude’s first foray back in central London since Hibiscus.

Claude Bosi at Bibendum retains its grand exterior with its open and welcoming frontage to the all-day dining seafood bar and cafe with the addition of a flower shop from Hackney florist Grace & Thorn. This will once again be the social hub of South Kensington, where diners can begin the day with a coffee and pastry, lunch with friends of Dressed Cornish crab and Lobster aioli with French tarragon, sip Champagne accompanied by oysters after work, or dine into the evening sharing fruits de mere laden with a variety of crustacean, molluscs and shellfish.

The striking upstairs dining room with its dramatic, iconic floor-to-ceiling stained glass windows has been redesigned to house a larger central open kitchen. The light and airy dining room will feature the Conran chairs but with a soft colour palate of muted blues.

The menu in the first-floor restaurant is in Claude’s words, ‘unashamedly fine dining’ but with his recognised contemporary and light-hearted flair. Produce is sourced predominantly from the British Isles as well as France, and Claude is continuing to work with good friends who provide produce such as cheese (from Bernard Antony) and fish for his kitchen; salad is grown in Herefordshire, bread baked at Hedone in west London, and the very best Galician beef.