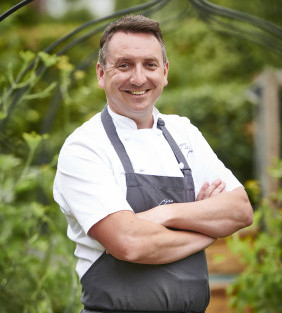 Raised in Filey on the North Yorkshire coast, James Mackenzie started his career in the kitchen at just 13 years old, before going on to train at Scarborough Technical College (now Yorkshire Coast College).

In 2006, James and his wife Kate took over the Pipe and Glass in South Dalton, near Beverley in East Yorkshire and have created a warm, comfortable Yorkshire country pub, where customers can drop in for a pint of ‘Two Chefs’ ale, or enjoy the highest standards of modern cuisine. In 2010, the Pipe and Glass was awarded East Yorkshire’s first Michelin Star, an award that it has retained ever since.

James is keen to champion the next generation of culinary talent and subsequently launched the Golden Apron competition, in search of Yorkshire’s best young chefs. He also works closely with local colleges to provide the Yorkshire Chefs Certificate, encouraging young chefs to engage in, and maximise the opportunity of work experience in the industry.

James’ debut cookbook ‘On the Menu’ was released in 2012, to critical acclaim and won best debut cookbook at the Gourmand World Cookbook Awards in Paris.

Named as the Craft Guild of Chefs Dining Pub/Restaurant Chef of the Year in 2016, James has become a television regular, as well as contributing to several cookbooks with his signature style of imaginative British cooking, using as much local and seasonal produce as much as possible.