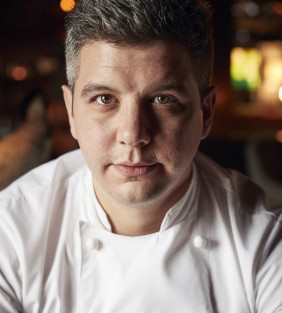 Originally from Wakefield in Yorkshire, Pete’s career in hospitably began at Middlethorpe Hall on the outskirts of York, where he worked as a kitchen porter from the age of 16.

It wasn’t long before a commis chef role arose for the hotel’s fine-dining restaurant, which he took on willingly and discovered an aptitude for cooking and love for kitchen life. He stayed at Middlethorpe for two years and worked his way up to chef de partie.

With his sights set on fine dining, Pete then relocated to Manchester to work for revered chef Paul Kitching at Juniper, a pioneering restaurant in Altrincham which held a Michelin star. His time here followed with a short stint co-running the kitchen of a country gastro-pub in the sleepy Yorkshire village of Bilborough.

In 2007 and aged 21, Pete moved down south to take a position as part of a newly formed kitchen team under the helm of chef Adam Simmonds and his anticipated new restaurant within Danesfield House Hotel in Marlow. During Pete’s four years at Adam Simmonds at Danesfield House, where eventually he was made junior sous chef, the restaurant received four AA rosettes and a Michelin star.

Keen for a change of scenery, Pete left the UK to embark on a ski season in the French Alps where he worked as a private chalet chef and learnt to snowboard. Developing a real passion for the sport, one season quickly led to three, which he alternated with summer months working as a private chef in luxury residences in both Marbella and Corfu.

Finally ready to leave season life behind, Pete returned to the UK in 2013. Soon after a junior sous role came up at The Hinds Head. After almost three years as sous chef, in 2017 Pete stepped up to take on the position of head chef.

With research and development playing a significant part of his responsibilities at the restaurant, Pete strives daily to uphold Heston Blumenthal’s philosophy of ‘Question Everything’, integral to the working ethos at The Hinds Head.