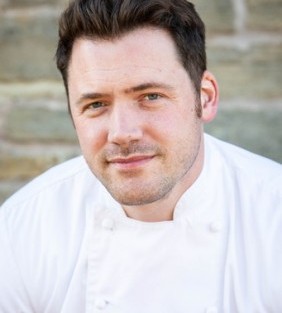 Tommy is Chef Owner of both The Black Swan at Oldstead (which he and his family have owned and run for the past 10 years) and his latest restaurant Roots York. They have lived and farmed around Oldstead for many generations; it's very much their creation, and very much Tommy's passion. With his farming background naturally he wanted to grow his own produce in Oldstead, so over the past 4 years a 3 acre kitchen garden has taken shape in the feld next to the restaurant. Both kitchen and front of house are now very closely involved in the incredibly short journey from feld to plate. This garden now not only provides produce for The Black Swan, but grows produce that is transported to the city for Roots York, The Banks family's second restaurant on a daily basis.

Tommy has achieved great attention and national recognition. At the age of twenty-four, he became the youngest Michelin-starred chef in Britain when The Black Swan retained its star in September 2013. The Black Swan also gained a 4th AA Rosette in January 2016, making it unique as the only restaurant in Yorkshire to hold a Michelin Star and 4 AA Rosettes. Tommy competed on Great British Menu in October 2016 and June 2017, with both his Mackerel fish dish (in 2016) and his Turbot, Strawberries & Cream fish dish (in 2017) making it through to the Banquet.

Tommy Banks’ debut book ‘Roots’ was published by The Orion Publishing Group on 5th April 2018. It was the UK winner for the Gourmand World Cookbook Awards in the Chef category 2018.