At the age of 15 Rob joined the industry where he grew up in Somerset. Gaining experience from kitchens in London, France and Edinburgh before moving closer to home and becoming head chef at the Michelin-star-awarded Pony and Trap at just 21. Currently Head Chef of Root, Rob’s vegetable led menu has been gaining attention since the opening and was awarded a Bib-Gourmand in 2018.The restaurant is housed in shipping containers, harbour-side in Bristol’s Wapping Wharf. He opened Root alongside Josh Eggleton in 2017 and runs it with his wife Megan.

Rob works with fantastic local ingredients to create simple, honest and produce-driven food. He considers his location in Bristol to be a real advantage, affording him access to exciting produce from the surrounding countryside. Working with a hard-working and passionate team, he ensures that Root’s food offering stays unwaveringly fresh, sustainable and, ultimately, delicious. 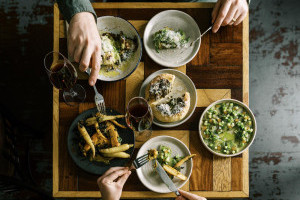