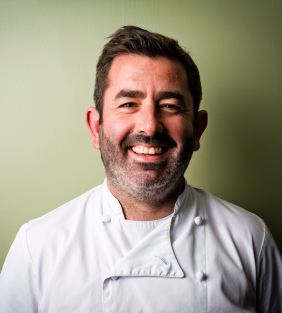 Mike Bullard is the Chef Proprietor of The Butchers Social at The Forest Hotel – a boundary-pushing restaurant that is redefining the premise of fine dining.

Mike has been in the kitchen since he was 15 years old; washing up, filleting fish and peeling a lot of vegetables. He started his apprenticeship at Metro Bar and Grill in Birmingham, and moved through the ranks within the Lovely Pubs company, before leading to gain a wide range of experience with contract catering, outside catering, and working at University College Birmingham.

Mike was then appointed as Consultant Executive Chef at West Bromwich Albion, which led him to win multiple awards and gain significant recognition within the food industry very quickly. He also spent some time in New York working for a number of Michelin-starred restaurants, including Le Bernadin (3 Michelin stars), Per Se (3 Michelin stars) and The Breslin (1 Michelin Star).

Back from New York, Mike then became a private chef and consultant to the rich and famous, cooking on yachts and at private chateaux.

From there, Mike set up The Butchers Social: starting as a short pop-up residency in Harborne, Birmingham, The Butchers Social enjoyed huge acclaim when it set up its first permanent space in the quaint town of Henley-in-Arden. Here, Mike and his team gained huge recognition from locals and food-tourists alike.

Setting his sights on new challenges and opportunities, Mike relocated The Butchers Social to The Forest Hotel in 2020, making home for the brand in one of Solihull’s most-loved areas: Dorridge. With his signature-style of elevating Britain’s favourite dishes, by marrying seasonal ingredients in new and exciting ways, The Butchers Social at The Forest Hotel has been welcomed with open-arms by its new neighbours. Following its restaurant refurbishment in 2021, which saw doors open at the close of last year, Mike and the team are already the talk of the town, for all the right reasons.

When he's not at the helm of the kitchen at The Butchers Social, Mike has appearances around the country cooking on demo-stages. What's more, he still acts as a consultant for Solihull Moors Football Club.