Claude, born in 1972, graduated from catering college and did his apprenticeship in Lyon; he then moved to Paris to Le Chiberta (Michelin two star) as Demi Chef de Partie, for one year. His next position was for two and a half years with Alain Passard at L’Arpège in Paris, starting as Chef de Partie, then climbing to Sous Chef – during this period L’Arpège moved from two Michelin stars to three. This was followed by nearly one year at Alain Ducasse in Paris, as Chef de Partie. Claude then moved to England in November 1997 to work as Sous Chef, then Head Chef, at Overton Grange, south of Ludlow, Shropshire. The restaurant earned a Michelin star under his role as Head Chef in 1999.

Ludlow
He then opened Hibiscus in Ludlow in 2000, and in 2001 the restaurant was awarded its first Michelin star, followed by a second in 2004.

London
Claude sold Hibiscus in Ludlow in March 2007, and relocated it to London with support from three investors. The 45-seat restaurant then launched in October 2007 at 29 Maddox Street in Mayfair. In late 2013, Claude bought out his investors, redesigned the interior to give it a more relaxed yet personalised feel, and added the Chef’s Table and development kitchen. Hibiscus received numerous accolades for its modern French cuisine: two Michelin stars since 2003, a 9/10 rating and #5 in the UK in the Waitrose Good Food Guide 2016, and five rosettes in the AA Restaurant Guide 2016. Hibiscus was also recognised as a member of a member of the Relais & Châteaux and Les Grandes Tables du Monde Qualité & Tradition guides. Claude closed the doors of Hibiscus after the last diner service on Saturday 1st October 2016.

With a major refurbishment starting on 3rd January 2017, the project of renovating the 1st floor restaurant of Bibendum took 10 weeks.
Claude Bosi at Bibendum launched in late March 2017.
In October of the same year it was awarded 2 Michelin stars, a phenomenal achievement. 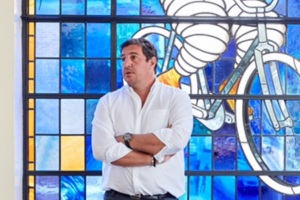